Remembering composer and singer Hemant Kumar, who straddled the worlds of Hindi and Bengali cinema, on his 101st birth anniversary

It was 1952, and a music director in his early 30s was making his debut in Hindi films. He had been fairly successful in Bengali cinema, both as a singer and composer, but Bombay’s industry promised new opportunities. It was the historical drama Anand Math, and newcomer Hemant Kumar chose ‘Vande Mataram’, a song everyone was familiar with.

Sung in separate versions by Lata Mangeshkar and Hemant Kumar, though the film had other well-known songs by Geeta Roy (later Dutt), the success of ‘Vande Mataram’ made filmmakers look at Hemant Kumar in a different light.

The legendary musician’s 101st birth anniversary was celebrated on June 16. His career, and the enormous role he played, can be broadly divided into four segments — Bengali music, Hindi music composing, Hindi playback singing, and singing in other languages. For Indian audiences at large, his role as a Hindi film singer has probably been the most admired, with Lata Mangeshkar and Asha Bhosle naming him among their favourite male voices.

Born Hemanta Mukhopadhyay in Benaras, his family later moved to Kolkata. He was deeply involved in music as a teenager, and cut his first non-film disc in 1937, making his Bengali film debut in Nimai Sanyas in 1941. Though he recorded for the 1944 Hindi film Irada, which had music by Pandit Amarnath, he eventually began focusing on Rabindra Sangeet, becoming one of the most respected exponents of the genre.

When director Hemen Gupta asked him to compose music for Anand Math, Hemant Kumar decided to shift to Mumbai. Despite the composing break, he soon became known as a playback singer, singing ‘Yeh raat yeh chandni phir kahan’ for S.D. Burman in the 1952 film Jaal.

The following year, his voice was noticed in the Patita song ‘Yaad kiya dil ne,’ composed by Shankar-Jaikishen. He made a mark singing ‘Jaag dard-e-ishq jaag’ and ‘Zindagi pyar ki do char ghadi’ for C. Ramchandra in Anarkali. Though Lata Mangeshkar had some iconic songs in the film, Hemant Kumar’s voice attracted attention for its unique texture.

According to connoisseurs, that texture had its advantages and disadvantages. On the positive side, it had a distinct depth, and sounded unlike anybody else’s voice. But some music directors felt it did not match every actor. They opted for Mohammed Rafi and later Kishore Kumar for different kinds of songs, and Talat Mahmood or Mukesh for the sad ones.

S.D. Burman was the one music director who had tremendous faith in Hemant Kumar’s singing skills and, interestingly, some of their best songs were picturised on Dev Anand. These included ‘Teri duniya mein jeene se’ and ‘Chup hai dharti’ from House No 44, ‘Hai apna dil toh awara’ from Solva Saal, and ‘Na tum hamein jaano’ from Baat Ek Raat Ki. 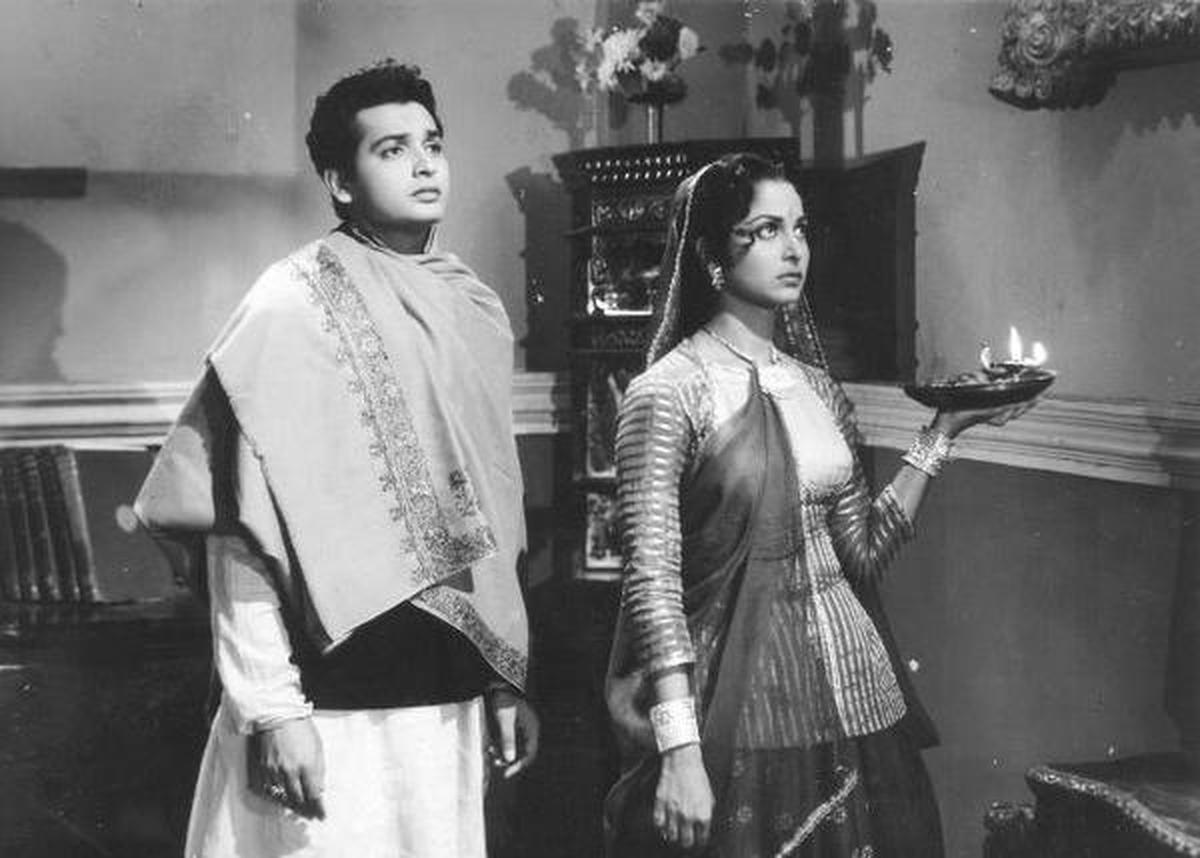 A scene from Bees Saal Baad

One of Hemant Kumar’s most iconic songs with S.D. Burman featured Guru Dutt. Interestingly, while Rafi sang the other songs for Pyaasa, ‘Jaane woh kaise log the jinke’ was rendered by Hemant Kumar. This was despite the fact that director Guru Dutt wanted Rafi to sing it. And although the filmmaker was not convinced, he had to bow to his music director.

The Hemant Kumar playback catalogue was filled with other gems. He had ‘Nain so nain’ for Vasant Desai in Jhanak Jhanak Payal Baaje. For Roshan, he sang ‘Chupa lo dil mein’ in Mamta, and for Kalyanji-Anandji, he had ‘Neend na mujhko aaye’ in Post Box 999 and ‘Tumhe yaad hoga’ in Satta Bazaar.

Naturally, some of his best songs were from films he composed for. The two best known examples were his productions, Bees Saal Baad and Kohra. The former had ‘Beqarar karke’ and ‘Zara nazron se’, sung by him, and the Lata classic ‘Kahin deep jale kahin dil’, whereas Kohra had ‘Yeh nayan dare dare’ in his voice and Lata’s ‘Jhoom jhoom dhalti raat’.

As a music director, his early successes after Anand Math included Shart, which had the song ‘Na yeh chand hoga’, Jagriti, with ‘Aao bachchon’ and Nagin, which had the super-hit ‘been’ song ‘Man dole mera tan dole’. His other successes as a music director included Sahib Bibi Aur Gulam (which had Geeta Dutt’s ‘Na jao saiyyan’ and Asha Bhosle’s ‘Bhanwara bada nadaan’) and Khamoshi (best known for his ‘Tum pukar lo’ and Kishore Kumar’s ‘Woh shaam kuchh ajeeb thi’).

Hemant Kumar’s Hindi film career slowed down in the 70s, but he reamined a huge name in Rabindra Sangeet, also composing for Bengali films. He sang in other languages too, with the 1969 Marathi duet with Lata, ‘Mi dolkar daryacha raja’, composed by Hridaynath Mangeshkar, becoming a big hit. His voice still stirs fans whether they listen to the Bengali song ‘Dagor dagor chokhe’ or ‘Ya dil ki suno’.

When Hemant Kumar died aged 69 in Kolkata, he left behind a rich legacy and irreplaceable voice.

The writer is a Mumbai-based music journalist.

Shetty took to Instagram and posted a note, writing that she has full faith in the Mumbai Police and the Indian judiciary Breaking her...
Read more
Entertainment

Mrunal Thakur to make her Telugu debut opposite Dulquer Salmaan

Mrunal Thakur has announced she is set to make her debut in Telugu cinema opposite Dulquer Salmaan.Produced by Swapna Cinema, the film is...
Read more
Entertainment

Renowned classical and playback singer Kalyani Menon passed away after a brief illness on Monday at a city hospital. She was 80....
Read more
- Advertisment -

CBSE Class 10 Results to Be Announced at 12pm Today: How to Check