Keen on the NFT art drops? It’s all about strategy, buyer knowledge and timing

As the hype around NFT art reaches a crescendo, here’s how we may have to shift our thinking as more artists venture into this crypto-fuelled world

“Let’s be honest, the NFT art world would not be having the trajectory it is, if Metakovan and Twobadour did not spend close to $70 million worth of crypto on Beeple’s Everydays: The First 5000 Days,” says Amrita Sethi, “That figure alone is enough for artists to start delving into the virtual NFT art space.”

Amrita, having been a banker for many years is aware of the economics and hefty financing required to get NFT off the ground. She points out the reason prices are sky-high at the moment is the virtual world understands how much of a pivotal moment this is for society — this is then priced into the virtual art market. The artist has even divided timelines into two: B.B. as ‘Before Beeple’ and A.B. as ‘After Beeple’, similar to those of B.C. and A.D. — who knows, this might even catch on.

An NFT (non-fungible token) is a unit of data stored on the Ethereum blockchain. NFT art sees original artwork linked to the NFT, as a form of certification that the artwork is original, so the digital art can be replicated but the token cannot. Naturally, when the Beeple piece sold for tens of millions of dollars, a wave of artists got into it. Now, the hype is real but are artists’ expectations realistic?

MetroPlus speaks with artists working closely with the NFT world, about how artists should strategise and be prepared for unpredictable changes in this new space.

Based in Bengaluru, Raghava KK is not just an artist — he is a storyteller, a researcher and a technologist obsessed with Artificial Intelligence. An early crypto investor, he was one of the few people in India who saw scope for art investment in this space; he had examined a lot of it in terms of aesthetics, patronage, what it would liberate for the art world, and even how it can cause a lot of harm.

“This disruptive technology has the potential to create utopias and dystopias — as with any technology. Six years ago, I put together a 200-year plan for art but it was not called NFT back then, it was ‘standardised encryption for digital assets’,” he shares.

Raghava says artists should know the history; there is a rich and complex one.

One early example is Denmark’s Bank of International Art Money established in 1998 by Lars Kreammer and Flemming Vincent. Artists were invited to mint their own currency (literally called Art Money) and exchange it amongst themselves. Eventually, they got local stores to start accepting it, and this spread to other countries. Raghava decided to bring it to India, by which time a few artists were on board. Unfortunately, BIAM got halted and disassembled once the Danish Government sued them for using the word ‘bank’. This inspired the thought of artists finally engaging with the world on their own terms and making good money for their hard work,” he explains.

Then there is Sedition Art, one of the world’s first digital art marketplaces where artists such as Yoko Ono and Damian Hurst hosted their works; Raghava also joined in. But Sedition did not have the take-off artists quite hoped for. In the early 2000s, the gaming industry stepped into the world of digital assets and micro-transactions where gamers could purchase avatars and skins for use in the virtual world. Raghava sees this moment as a game-changer (pun intended) for digital art. But NFT art still would not happen for years to come and when it did, Raghava was fuelled up to take part again. “I did not join because of FOMO, but for the intent,” he avers.

There is a growing community of NFT artists in India. For example, on Instagram account @CryptoArtIndia features dozens of artists registered on various marketplaces. The account itself helps market these artists’ works.

Amrita is known in traditional art circles as the banker who became an NFT artist but in the virtual world she is known as a traditional artist who became an NFT artist. She is also the United Arab Emirates’ first NFT artist. Her mixed media work sees soundwave art created with striking visuals; these soundwaves can be played via a QR code. Though she had created her work digitally, there are physical manifestations of them as seen at international art shows in Dubai and Hong Kong. 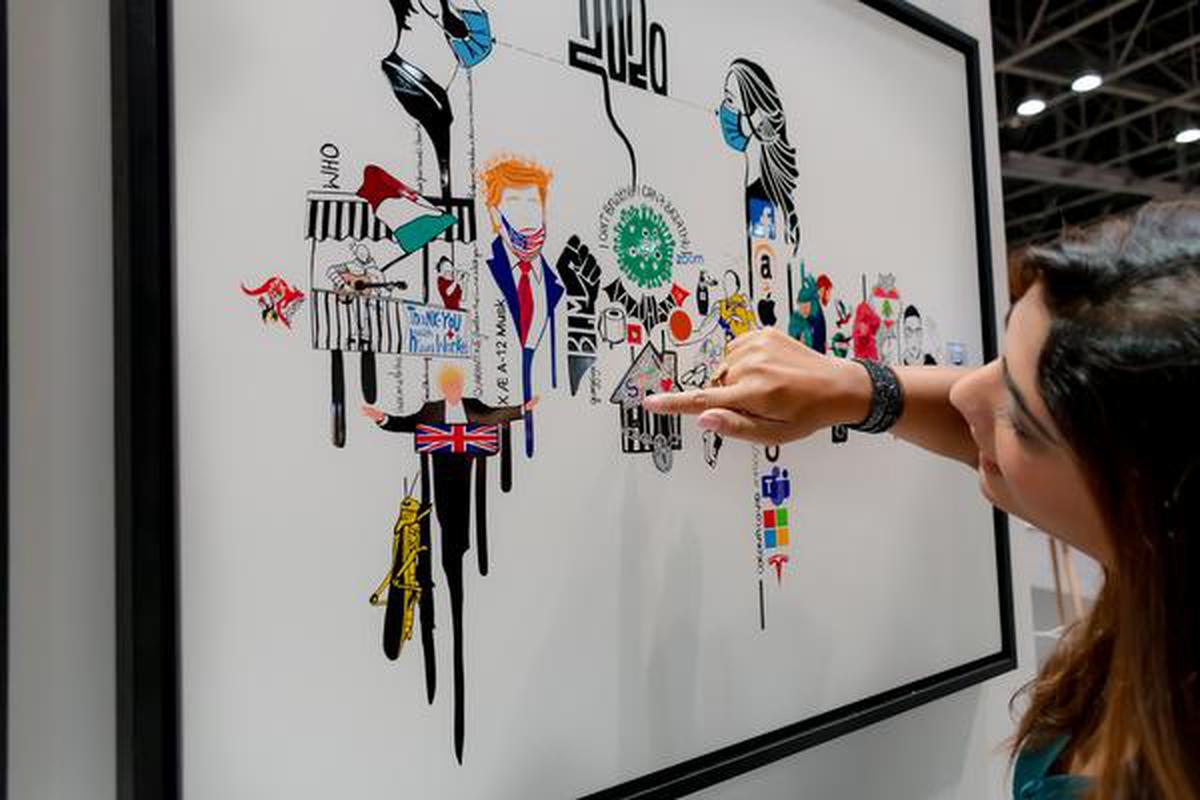 “Art comes first, the form comes second. When COVID-19 hit, I thought that was the end of my art career. But I decided to work digitally, as did everyone. That paradigm shift is almost spiritual because of the instrinsic idea of ownership — whether the art is physical or digital — the knowledge evolves,” she explains. “The interaction with digital artworks is also greater in that you can move it around, go into it, listen to it, whatever it allows. In the physical world, you do tend to be limited to set dimensions. That excites me, knowing where I can take my art, and I tell artists this is a way to expand your minds. I’ve had artists come up to me and ask ‘how do I make my statue into an NFT?’ and I respond with ‘perhaps take a picture and then animate it…’ it keeps growing. We are going to see some incredible pieces of art when this shift happens on a greater scale.”

Having lived in Kenya, Switzerland, London, and Dubai, she has an informed global perspective on digital art and buyer behaviour. She comments, “There’s two types of buyers in the world: the ‘physical’ and ‘virtual’. As I mentioned, the high prices are there but there will be a normalising and then you’ll see the virtual art market becoming like that of the physical art market; any collector would research about an artist: their style, their state of mind, where they have shown. My advice is you have to educate the physical world first. For example, in the physical world, I talk about what an NFT is, but in the virtual world, I talk more about my art and process around it.” 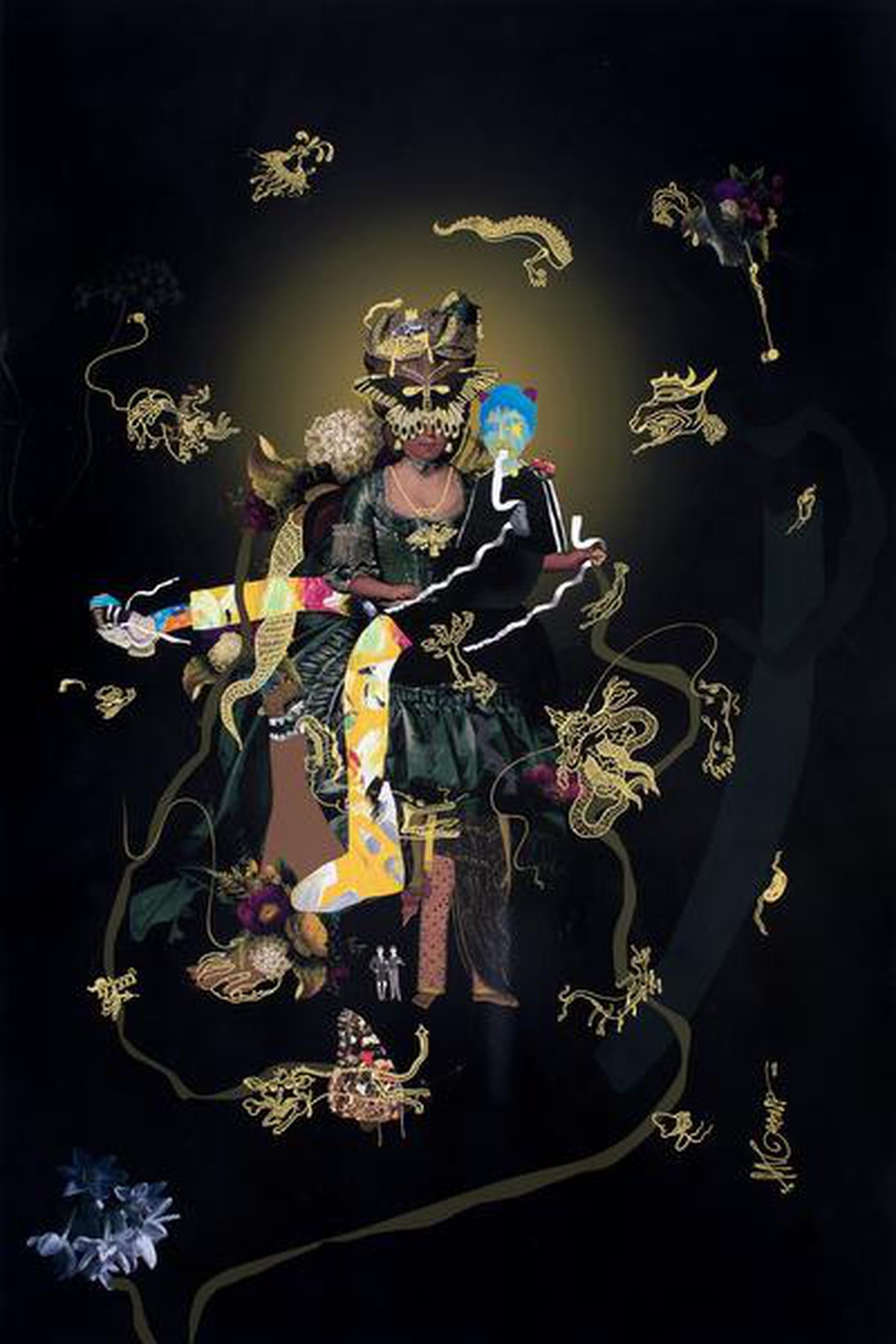 Raghava’s own NFT art has traces of Eastern influences. “I want the world to have a bit of disruptive India in their collections,” he chuckles. But he points out artists should look into the mindsets of the buyers: what they are interested in and willing to spend precious crypto on. “Exclusivity is rare in a capitalistic economy, but crypto investors — typically libertarian — look to break out of this. It’s an anti-political statement to de-establish the real-world art system.”

Chennai-based software developer Siraj Hassan just launched a series of glass jar-oriented art pieces — which he calls his signature work — called CagedNFT on OpenSea. He agrees that artists should be aware of what buyers’ inclinations are. “I’ve noticed the buyers are often future-thinking individuals, so they tend to lean towards sci-fi and hyper-luminous works,” he observes.

Amrita points out, “Artists have to also consider ‘gas fees’, payments made by users to compensate for the computing energy required to process and validate the Ethereum transactions.” One of the biggest questions is ‘which is the best marketplace?’

Amrita uses Terra Virtua, where people who do not have existing crypto investments can use fiat money (real world, Government-issued currency) to buy. Terra Virtua also helps people with different ways to view the art they have purchased, says Amrita, adding, “You can view it on a screen at home or even set up a Virtual Reality fan cave, where you have your living room and place your NFT art around it and experience it with headsets. It also has Augmented Reality options.”

Amrita points out that due to the nascent stages: “There is no gold standard for NFT art marketplaces yet. In the physical world, you have Sotheby’s and Christie’s as the gold standard of auction houses: the virtual world will reflect the same. So what we may observe over the next few months or next year, is more NFT art marketplaces coming out with competing benefits for both artist and buyer, and eventually, there will be the ‘top dog’.”

There are many naysayers calling the entire thing a ‘fad’ or other unmentionable yet colourful words. Raghava says, “They’re in for a nasty shock soon!”

Amrita responds with a laugh, “There is a lot of misunderstanding, and a lot of people will try to demystify this space and bring it down. The same level of skepticism happened with electric cars and now Elon Musk is manuacturing them in thousands and sending them to space.”

Raghava, Amrita and Siraj all say artists should go into NFT art having learned as much of the fundamentals as one can. Amrita concludes, “Learning along the way is a constant; so keep your wide open, and the age of the starving artist could be over.”