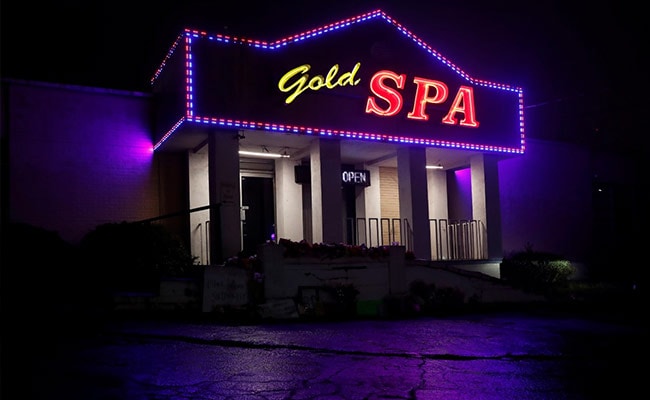 Flowers are laid in front of Gold Spa following the deadly shootings in Atlanta, Georgia, US.

Homicide detectives on Thursday weighed the possible motives of a gunman accused of fatally shooting several Asian women in Atlanta-area spas, as a U.S. lawmaker said the Asian-American community was “bleeding” from a recent surge in violence and discrimination.

“Nothing is off the table for our investigation,” Atlanta Deputy Police Chief Charles Hampton said at a news conference in response to a question about whether police were looking at the killings as possible hate crimes.

“We had four Asian females that were killed, and so we are looking at everything to make sure that we discover and determine what the motive of our homicides was,” he said.

Investigators have determined that Long had previously frequented both spas in Atlanta where he is accused of opening fire with a 9mm gun he purchased earlier in the day.

Investigators said Long, a 21-year-old Atlanta-area resident who is white, suggested to them that sexual frustration led him to commit violence. Numerous political leaders and civil rights advocates have speculated the killings were motivated at least in part by rising anti-Asian sentiment since the outbreak of the COVID-19 pandemic.

President Joe Biden ordered the U.S. flag be flown at half-staff at the White House to honor the victims of Tuesday’s rampage. He and Vice President Kamala Harris will visit Atlanta on Friday to offer support to the Asian-American community.

In Washington, U.S. lawmakers, professors and actor Daniel Dae Kim said the Asian-American community was reeling from a year of heightened anti-Asian attacks and discrimination.

“Our community is bleeding, we are in pain and for the last year we’ve been screaming out for help,” Democratic Representative Grace Meng, who is of Taiwanese descent, told a House of Representatives subcommittee on Thursday.

The Georgia killings have prompted police departments to step up patrols and visibility in Asian-American communities around the country, including New York City, Chicago, Atlanta and San Francisco.

The incidence of hate crimes against Asian Americans rose by 149% in 2020 in 16 major cities compared with 2019, according to the Center for the Study of Hate and Extremism.

Civil rights advocates have connected the rise in incidents to the COVID-19 pandemic, which originated in China. Some Americans, including Republican former President Donald Trump, started calling the coronavirus the “China virus,” “the China plague” and even the “kung flu.”

Hampton said Long patronized both establishments attacked in Atlanta, the Gold Spa beauty salon and an aromatherapy spa across the street, but it was not clear whether he “specifically targeted” any of the victims at those two businesses.

Captain Jay Baker of the Cherokee County Sheriff’s Department said on Wednesday that Long had confessed to the shootings and indicated he had a sex addiction and “wanted to eliminate” the temptation the establishments represented to him.

A former roommate who spent several months living with Long in a halfway house for recovering addicts told Reuters Long had been treated for sex addiction, was “deeply religious” and would become “very emotionally distraught that he frequented” spas for “explicitly sexual activity.”

Long was headed for Florida when he was apprehended, perhaps to carry out further shootings, authorities said.

Cherokee County District Attorney Shannon Wallace issued a statement on Thursday saying “much work on the investigation and prosecution remains ahead” and vowing to “prosecute this case to the fullest extent of the law.”

Long had been scheduled to make his initial court appearance in Cherokee County on Thursday, but the hearing was canceled after he waived his right to the proceeding, according to a statement from his lawyer.

The attorney, Daran Burns, said his firm had been appointed to represent Long by the county’s Office of Indigent Defense, and that Burns met with his client at the county jail on Wednesday.

Burns made no mention of Long’s guilt or innocence, but said his firm “will conduct a thorough investigation on our client’s behalf.”

Renewable Energy Powers Ahead In 2020: Report

<!-- -->IEA noted that nations pushed ahead with renewable energy despite the pandemicParis, France: Renewable energy grew at its fastest rate in two...
Read more
World