Rose Byrne on getting ‘Physical,’ and the art of comedy

The Hollywood star discusses her latest Apple TV+ show that involved recreating the zeitgeist of the ‘80s, as well as her commitment to female-driven storytelling

Even on a Zoom call, Rose Byrne looks picture-perfect. There’s not a strand of hair out of place, and the Australian presents a picture of poise and calm, as she talks to journalists across the world during a series of virtual junkets to promote her new Apple TV+ project.

But every once in a while, a question or an observation intrigues her truly, and she breaks out into laughter or replies with a funny answer, taking us back to those roles that have made her one of the finest comedic stars of our times.

Be it her hilarious turn as a status-hogging wife in Bridesmaids, an exasperated mother in the Neighbors movies, or the charming museum curator caught between two men in Juliet Naked, Rose has been a scene-stealer in several recent comedies. But it’s not just those performances that adorn her career; her appearances in the Insidious franchise, and shows like Damages and Mrs. America, have established her as an actor to slam-dunk any role she takes on.

Next up for the genre-hopping star is the dark comedy Physical, created by Annie Weisman. Set in the ‘80s, Rose plays Sheila Rubin, a quietly tortured housewife, who is struggling with her personal demons, while trying to support her smart but controversial husband’s bid for state assembly. The most unlikely escape liberates her — the world of aerobics —after which Sheila begins her road to empowerment and transforms into someone that was entirely radical at the time: the female lifestyle guru. As she develops her own brand, Sheila must not just battle her body image and eating disorder issues that threaten to derail her life, but also unexpected relationships and situations that test every part of her artfully composed self.

In a quick chat, Rose tells us about her Physical experience, recreating the zeitgeist of the ‘80s, and her commitment to female-driven storytelling

Excerpts from an interview:

How different was a dark comedy like ‘Physical’ to prepare for, compared to other classic comedies like ‘Bridesmaids’ or ‘Spy’?

My earlier films were more of hard comedies, with a lot of jokes and being more consistent. However, the theme of Physical belongs to a darker space. We meet Sheila when she is facing a crisis; she is dealing with a horrible illness and a very dysfunctional marriage. Not to mention, she is also ambivalent about motherhood. That is when she finds a way out of her life, through aerobics of all things! As an actor, it was such a rich script to take on, with this fantastic pilot episode that really examined the era of the 80s.

Rose plays Sheila Rubin, a quietly tortured housewife, who is struggling with her personal demon and finds an escape in the world of aerobics

I knew the commitment to do a television show is a lot; I hadn’t done one since Damages, which was 10 years ago. Sheila is almost an antihero but will you still want to root for her? Well, I wanted to root for her. So that was such an interesting conversation to start. Physical is also about this eating disorder she goes through, which is not always represented in a way that is taken seriously; it’s often a punch line or considered very trivial. But it is like any addiction, very serious and very scary, and incredibly destructive. So it was a really interesting world to explore.

Physical is also a very personal story for Annie [the creator], and she was incredibly candid with me from the beginning about that. It’s also about many women in her life and growing up in San Diego in the ‘80s.

The show explores several pertinent themes. What was your biggest takeaway?

It was so fascinating to really delve into. So now, everyone’s an innovator or an influencer on Instagram, and everyone has a blog or platform. But back then, they didn’t, especially women. The show turned out to be such a great way to reverse engineer, and look at where we are now, as this market is saturated with people doing this kind of thing. For Sheila, it is a way out economically, and out of this illness, and to harness this horrific inner voice she has that has been killing her. She has these liberal and progressive ideas, but at what cost does she let those go to become truly free? To me, it’s a very interesting tale about America; they are the land of innovators, entrepreneurs, self possession and entitlement of what you deserve and all that stuff. So, it’s really not a straightforward story at all, which made it so interesting.

In the series set 40 years ago, your character rebels against the system. How much do you think has changed?

Well, great strides have been made. There is greater representation on screen for young women, and I know that from friends with teenage daughters and things. But then there is such an attack on reproductive rights still, that is still so politicised. It is like, three steps forward, two steps back always. 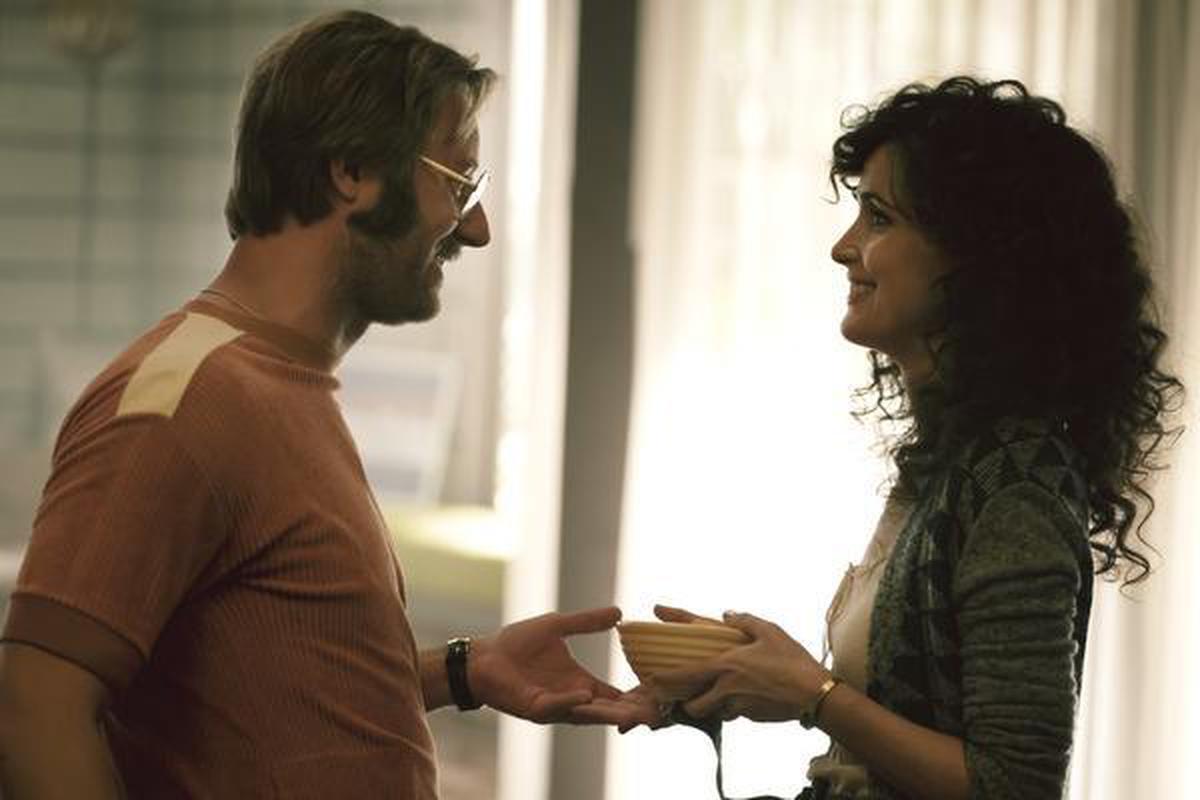 With co-star Rory Scovel in a still from the show

The ‘80s is a really interesting era, because it is just after that huge feminist wave, which I discovered really thoroughly when I did Mrs. America. Physical picks up chronologically in 1981. It is a very domestic story, but interesting, because it appears as a liberal marriage that she is in, and yet it’s actually incredibly traditional. Sheila is very much a supporting role to help her husband, despite his kind of rhetoric and politics and beliefs.

There is still so much to be done, particularly, you know, in places where it is much harder to access reproductive health and those where women are struggling economically, socially or religiously. In Australia, where I was privileged to grow up, I always had access and education about that. So yes, it is still something that needs to be worked on around the world.

You have not only starred in female-driven projects like ‘Mrs. America’, but you also formed the collective Dollhouse Pictures, that focusses on making films from a female perspective…

Like any actress, things have to naturally come your way. I was interested in trying to create stuff, which is when I met with friends here.

I feel like it is timing with everything. Something like Mrs. America, Physical or so many other fantastic shows about the female experience could not have been made five or eight years ago.

Now, with streaming platforms reflecting the culture and so on, we have the space to tell these kinds of stories, and I feel really lucky. But you have to run your own race, and part of that is trying to source and develop stuff. I’m totally inspired by so many people before me, men and women who’ve done that. Otherwise, being an actor is so much of just waiting for the phone to ring!

Offering a richly-designed world and immersive combat, The Ascent changes your mind about not needing a twin-stick cyberpunk shooter in your life Did you...
Read more
- Advertisment -