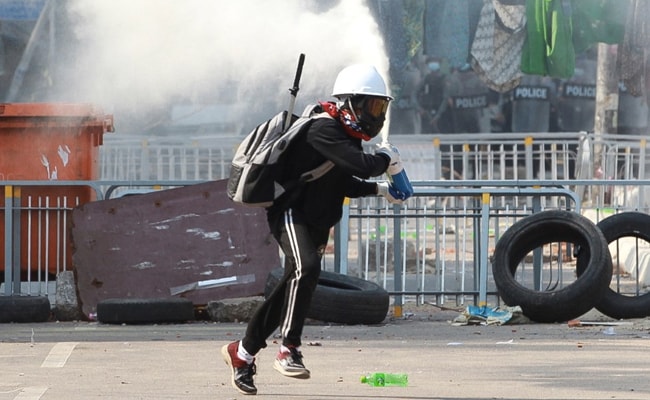 An anti-coup demonstrator sprays a fire extinguisher as he runs away from a barricade.

The U.N. Security Council on Wednesday condemned violence against Myanmar protesters and called on the army to show restraint, but failed to denounce the military takeover as a coup or threaten further action due to opposition from China and Russia.

More than 60 protesters have been killed and some 2,000 people have been detained by security forces since the Feb. 1 coup against elected leader Aung San Suu Kyi, the Assistance Association for Political Prisoners advocacy group said.

On Wednesday, security forces firing teargas and rubber bullets trapped hundreds of anti-junta protesters late into the night in two districts of Yangon.

Some protesters who managed to evade blockades set up by police in surrounding streets told of scores of arrests and said that some of those who got caught were beaten.

In a bid to increase pressure on the military as it continues its crackdown, the U.S. Treasury Department on Wednesday imposed sanctions on two children of military leader Min Aung Hlaing and six companies they control.

“The indiscriminate violence by Burma’s security forces against peaceful protesters is unacceptable,” said Director of the Office of Foreign Assets Control, Andrea Gacki.

Campaign group Justice for Myanmar said in January that Min Aung Hlaing, who has been commander in chief since 2011, had “abused his power to benefit his family, who have profited from their access to state resources and the military’s total impunity.”

In New York, the United Nations Security Council said in a statement that it “strongly condemns the violence against peaceful protesters, including against women, youth and children.

“The council calls for the military to exercise utmost restraint and emphasizes that it is following the situation closely.”

But language that would have condemned the coup and threatened possible further action was removed from the British-drafted text, due to opposition by China, Russia, India and Vietnam.

A junta spokesman did not respond to a request for comment. The military has brushed off condemnation of its actions, as it has in past periods of army rule when outbreaks of protest were forcibly repressed.

U.N. Secretary-General Antonio Guterres said he hoped the Security Council statement would push the military to realize it “is absolutely essential” that all prisoners are released and that the results of a November election are respected.

The army has justified the coup by saying that the election, won by Suu Kyi’s National League for Democracy, was marred by fraud – an assertion rejected by the electoral commission. The junta has promised a new election, but has not said when.

Guterres acknowledged that Myanmar was not a “perfect democracy” before the coup.

“It was still heavily under military control in many aspects, which makes this coup even more difficult to understand, especially the accusations of electoral fraud by those that were largely in control of the country,” he said.

State television MRTV announced arrest warrants against some of the best-known youth protest leaders and showed a picture of 29 wanted protesters. The protesters have been calling for international protection and action against the junta.

On Wednesday, police stormed a compound in Yangon housing railway staff and surrounded hundreds of protesters in North Okkalapa district, in another part of the city. More than 100 people were arrested at the two sites, witnesses said.

Many of the railway staff are part of a civil disobedience movement that has crippled government business and included strikes at banks, factories and shops.

Police and the army did not respond to requests for comment.

One youth said in a message to Reuters that other protesters had been beaten and slapped. He escaped by hiding in a large washing machine, he said.

“Tomorrow I will keep protesting. I will not stop. The goal is very clear that we want democracy. We want our elected government back,” he said, not wanting his name published.

One protester told Reuters from the southern coastal town of Myeik that he had been brought to Myeik Air Base and beaten with belts, chains, bamboo sticks and batons.

“The soldiers said, ‘This is the hell room, why don’t you guys have a taste?'” he said, declining to give his name for fear of reprisals. Reuters was unable to contact police in the town or the air base for comment.

Some police have refused orders to fire on unarmed protesters and have fled to neighbouring India, according to an interview with one officer and classified Indian police documents.

An Israeli-Canadian lobbyist hired by Myanmar’s junta will be paid $2 million to “assist in explaining the real situation” of the coup to the United States and other countries, documents filed with the U.S. government show.

Ari Ben-Menashe told Reuters on Saturday his task was to convince Washington that Myanmar’s generals wanted to move closer to the West and away from China. He said they wanted to resettle Rohingya Muslims who fled a 2017 assault for which the U.N. has accused the military of overseeing a genocide.